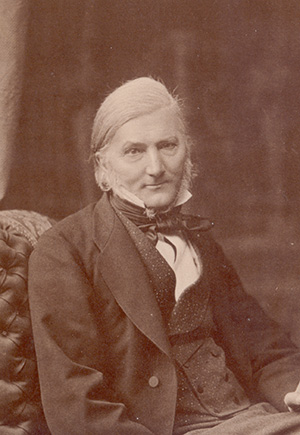 History of the United Herbaria Z+ZT

The herbarium of the University of Zürich was founded in 1834. At that time, Oswald Heer (1809-1883) started his professorship in botany at the University, which was founded one year before. The Botanical Museum of the ETH Zürich was founded in 1855 at the Botanical Garden "Zur Katz" (old Botanical Garden at the Pelikanstrasse) and hired its first curator of the botanical collections (Christian Brügger, 1833-1899) four years later.
Until his retirement in 1882, Oswald Heer was professor at the University as well as at the ETH. The appointment of Carl Schröter (1855-1939), succeeding Oswald Heer as professor at the ETH, brought about the separation of the joint botanical institutes of the two universities, and the botanical collections (except for the herbaria of Johannes Gessner and Johannes Hegetschweiler) were transferred to the ETH.
Starting with the appointment of Hans Schinz (1858-1941) as regular professor of the newly founded Institut of Systematic Botany in 1895, a rebuild of the botanical collections of the University of Zürich was initiated. The foundation for this new Botanical Museum were built by the endowment of the extensive private collections and libraries of Hans Schinz to the University. In 1990, the two herbaria of the University of Zürich (Z) and the ETH Zürich (ZT, including the herbarium of the Geobotanical Institute, RUEB) were combined. The ownership of the specimens is maintained, but the joint curation of the herbarium forms the foundation for a deepened collaboration of the botanical institutes of the two academies and allows increased synergies.